Round one to the gooseberry sawfly 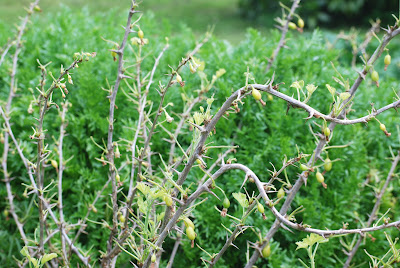 I am a live and let live gardener, I trust that in the fullness of time most pest populations will be kept in check by other things that live in my plot. As an organic gardener I don't spray at the first sign of trouble, I encourage biodiversity, use companion planting, construct physical barriers and rely on growing strong plants that will shrug off a pest attack, normally this works, things do sort themselves out. The great exception to this is the gooseberry sawfly, last year they ravaged the fruit garden, I was hoping the harsh winter might have done for them but no, they have started their relentless campaign of defoliation again!


After just a few days away I wandered into the fruit patch to find four of my gooseberries looking forlorn completely without leaves, tiny fruits hanging on to the naked branches. The culprits had already left the scene, stuffed with gooseberry leaves they are probably already in their silk cocoons pupating in the soil. The problem is I know the next generation are on their way. The gooseberry sawfly is the most impressive pest I have ever come across the small green- brown caterpillars with black markings hatch from eggs laid on the lower leaves of the plant they then very efficiently eat their way along the branches leaving nothing but leaf stalks in their wake (actually they don't touch the fruit either). In just a couple of days the plague  of caterpillars can strip a bush, they then pupate in the soil. I have spend hours (no exaggeration), shredding my hands picking off the caterpillars but there are always more! When the first wave vanish the naive might breathe a sigh of relief but battle veterans know another generation will appear, in fact there are three generations a year from late April to September. Last year they first stripped the gooseberries, moved on to the red and white currants and finally for an encore ravaged the jostaberries. Sturdy bushes will recover but harvests the following year will be affected and repeated defoliation will weaken and kill the plant.

Its time for retaliation, they may have won the first round by stealth, taking advantage of my absence but the fight is not over! Picking off the culprits just is not an option this time, it just didn't work. I have read about various DIY concoctions from steeped plant leaves used as a spray but they are all from toxic plants and sound a little too unknown for me. This year I have decided to get tough and employ the assassins of the pest world, nematodes, in the form of Nemasys Grow Your Own, which is completely harmless to the environment. I am ready for the next generation. Round 2 to the nematodes I hope!
Posted by Clare at 10:27

Clare
I am a garden designer and garden writer. This blog follows the progress of my own garden in Devon as it is gradually transformed into the perfect space for my family to relax, a place for me to persue my passion for growing fruit and veg and to indulge my great love of plants. For a full run down on what I have planned and the progress so far take a look at my first post on 9th February.